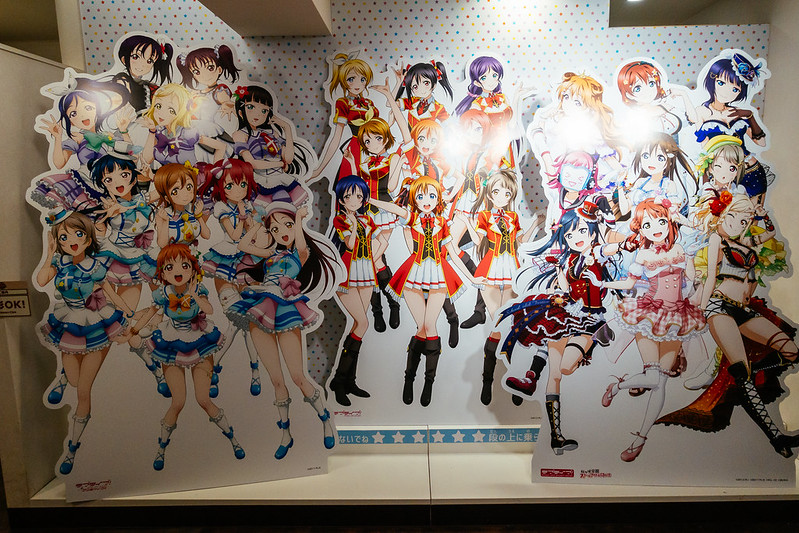 Hello it’s been awhile since I’ve updated my blog (3 years since last update?) but with current events I figured it’s as good a time as any to at least do something with it. I’ll be updating with a figure review later this week.

For today’s post I figured I should share some photos I’ve had on my computer that I never really finished editing. Earlier this year I went back to Japan for a really short trip to see Love Live Fest! I still don’t think I can really put down my experience into words but I’m sure if you dig around my Twitter long enough you might be able to find some of my reactions.

During those short 5 days we managed to squeeze some time into our schedule to visit the Sega collab cafe!  This post is mostly gonna be the photos I took:

The last few times we’ve been to Japan have also been short trips for eventing and the rest of the week we’d just improvise. However when I heard the Sega cafe was doing a special Love Live collab around the same time I made a reservations and thankfully got a slot on that Tuesday around noon.

The overall experience was pretty fun and cute! The collab itself ran for about 1-2 months and each week they rotated the theme between the 3 different franchises. The week we were in Japan happened to be dedicated to all 3 in honor of Love Live Fest! 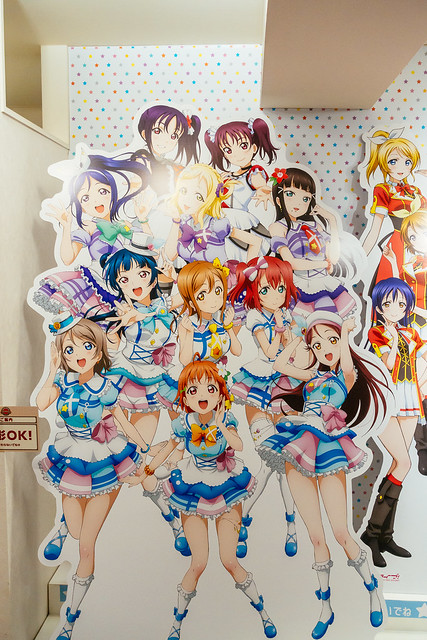 They had cardboard standees you could take photos of. Sadly the lighting position was weird so Aqours was the only one that turned out okay. You can see µ’s and Nijigaku on my Flickr. 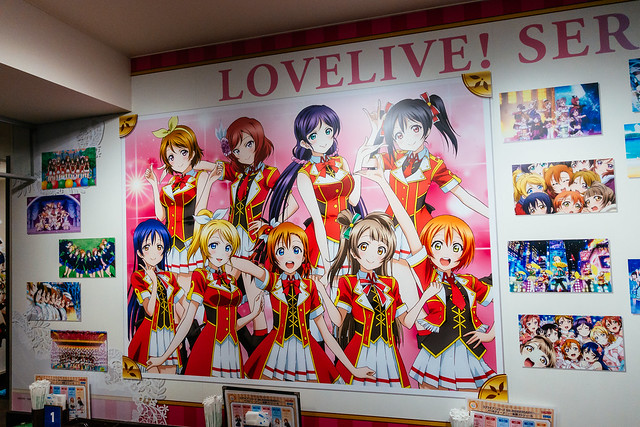 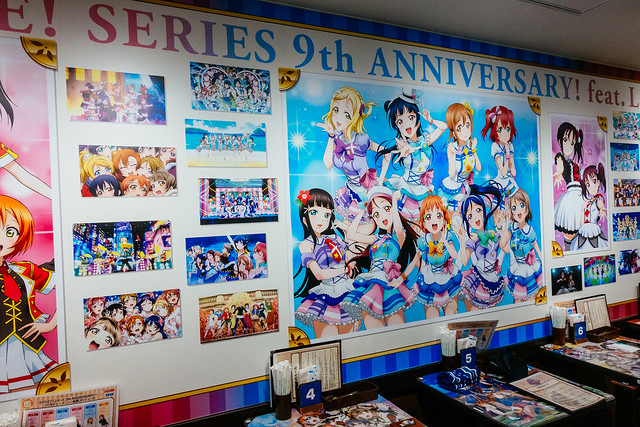 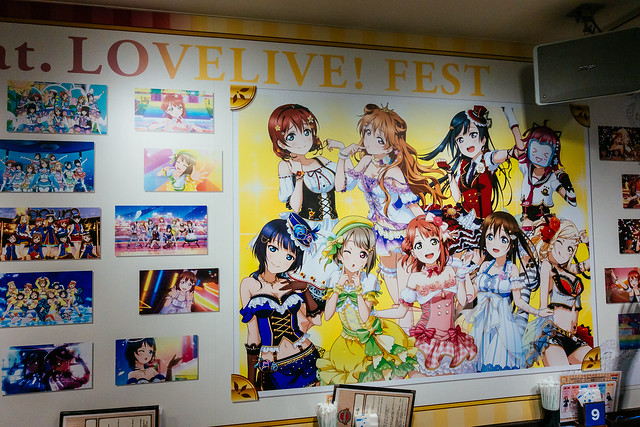 I think my favorite part of the experience was the giant wraps and themed decor. I liked that they made the space almost like a mini Love Live gallery leading up to Love Live Fest which happened that week! In between orders they gave you time to just walk around and take photos.

And yes Love Live music was on loop in the background~ 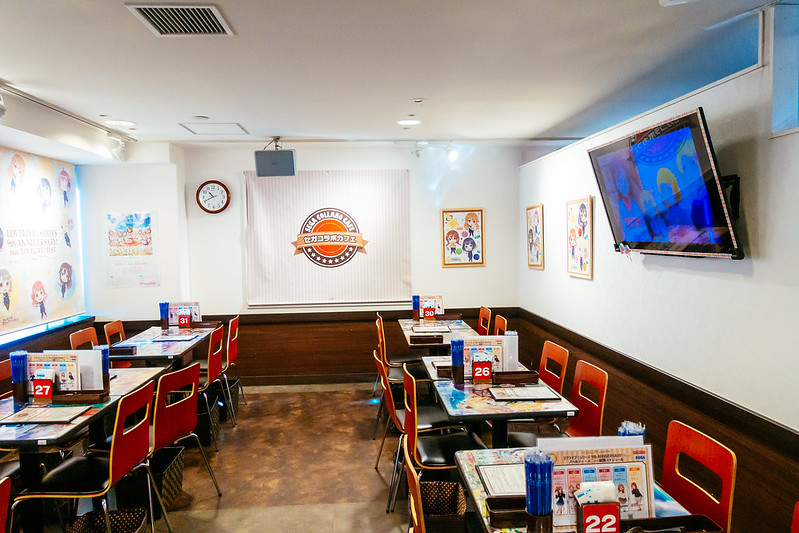 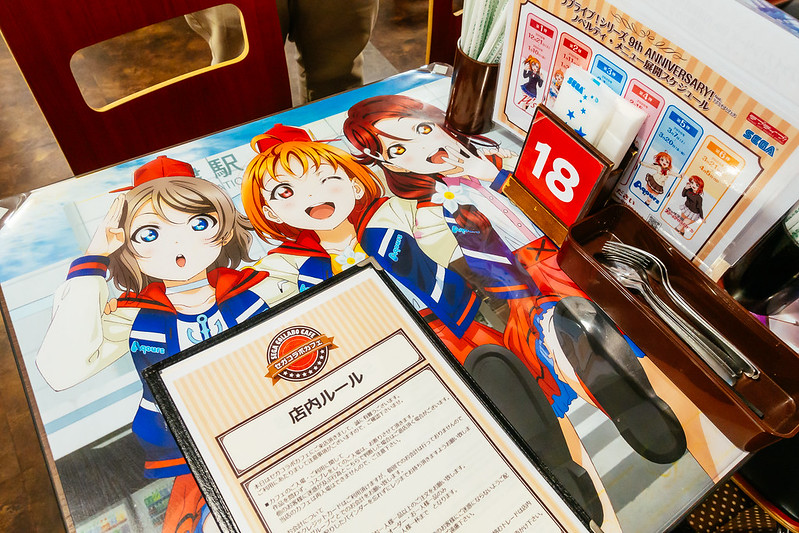 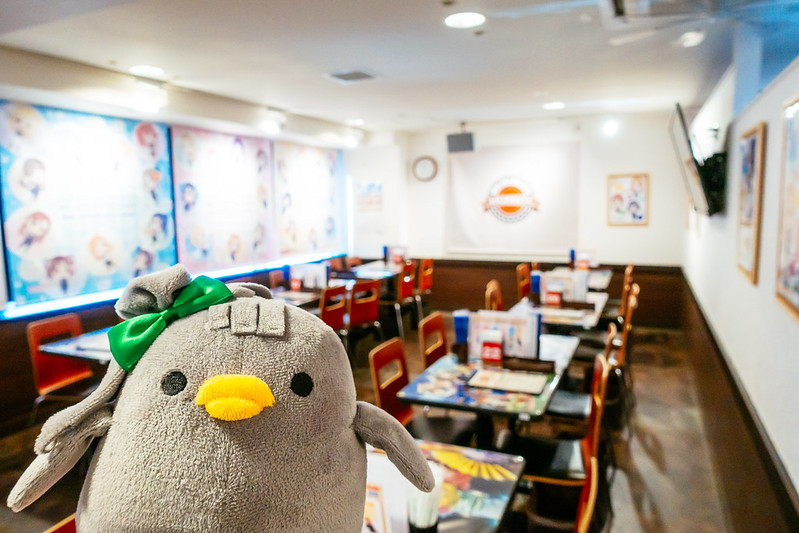 Pretty much the entire cafe was decorated: even the tables and blinds had Love Live images! 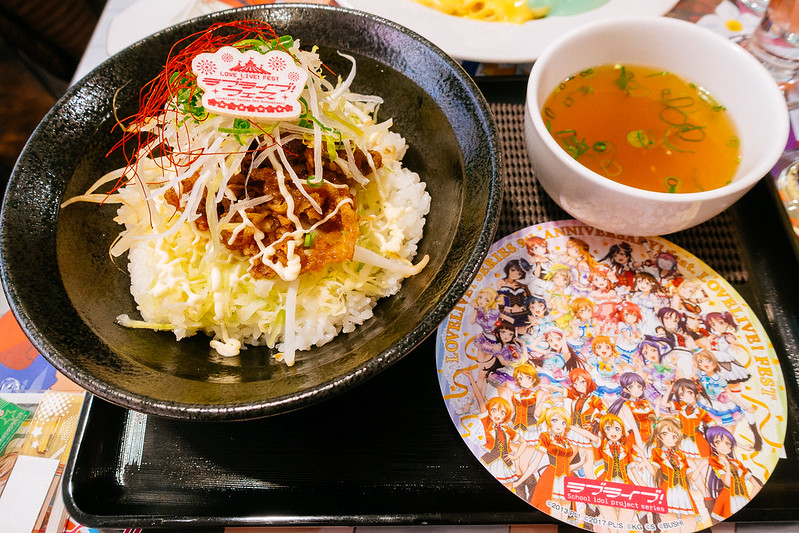 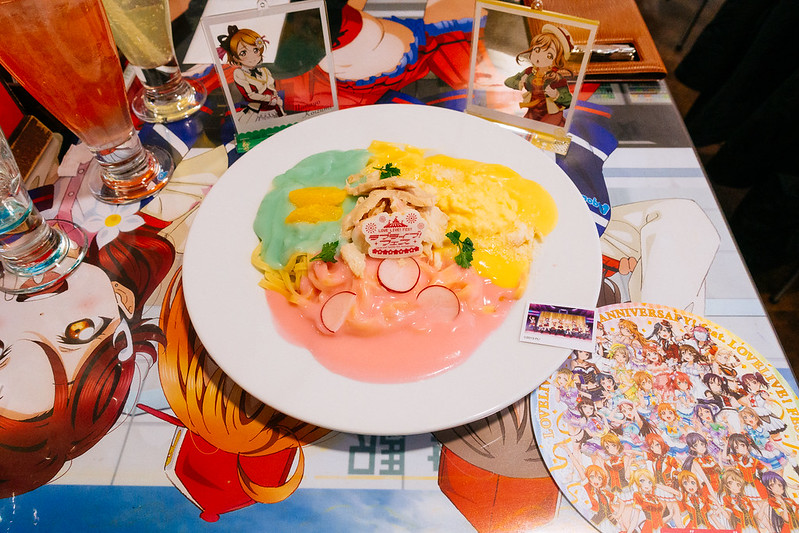 The food is what you would expect. It’s… okay but not bad. These cafes are mainly for the experience anyways. The 2 entrees for that week were a tamani-don and that neon pasta (lol). Each entree also came with a special giant 9th anniversary commemorative coaster! 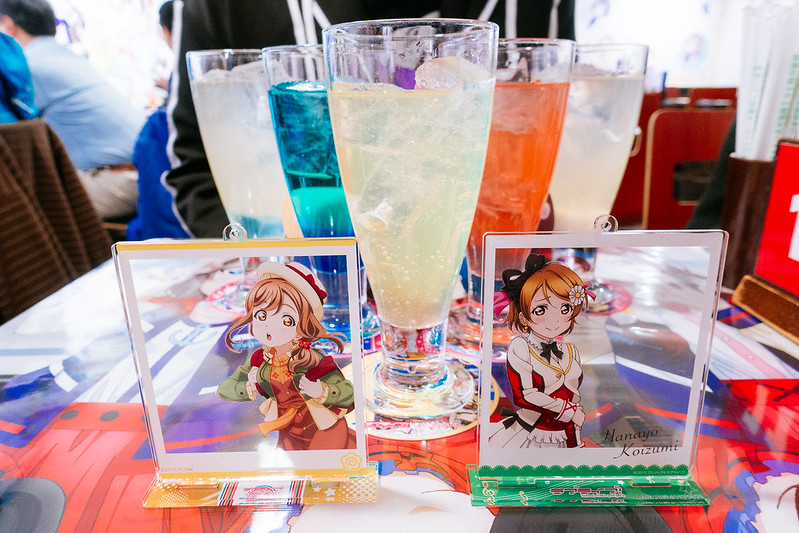 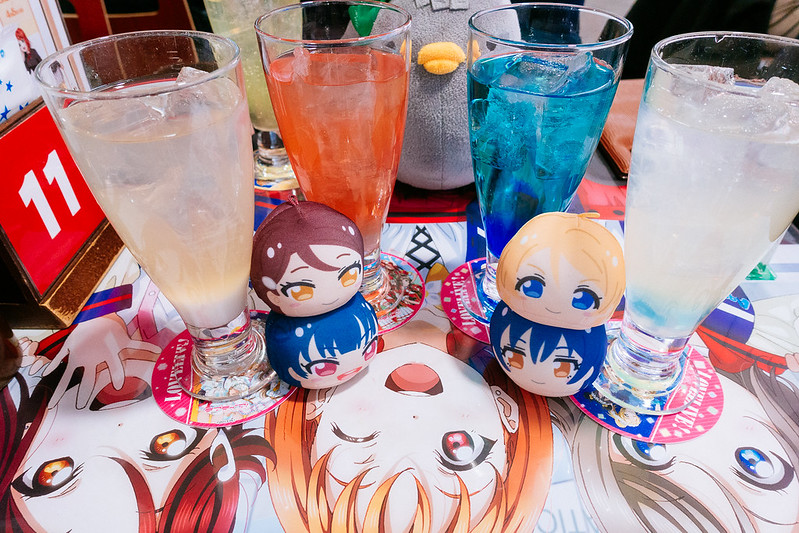 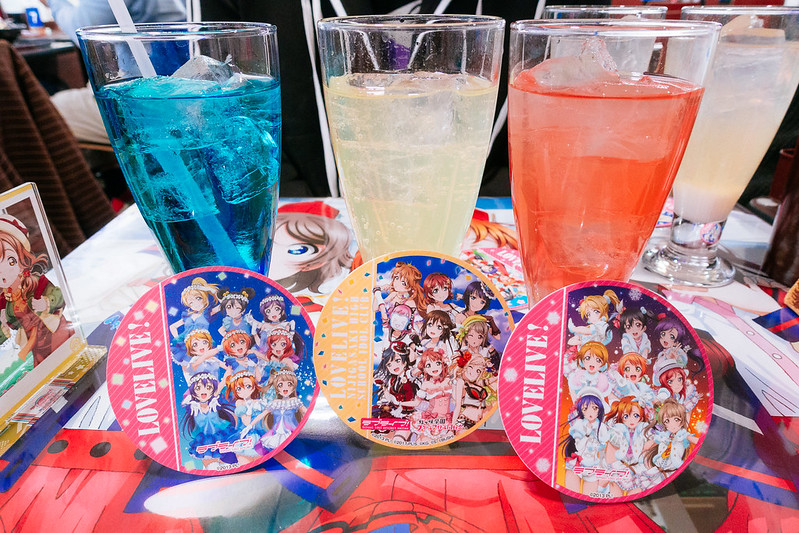 The fun gatcha part about the cafe were the drinks. With each drink order you got a random coaster so I think we ordered liked 5-6 drinks between the both of us…. 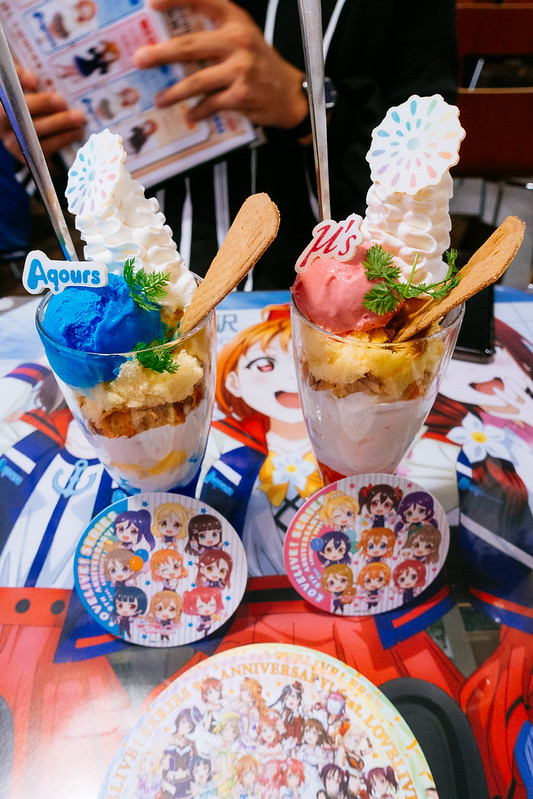 The parfaits also came with coasters depending on what themed parfait you got. We settled for µ’s and Aqours- at this point I don’t think we would’ve been able to fit Niji and Saint Snow…. 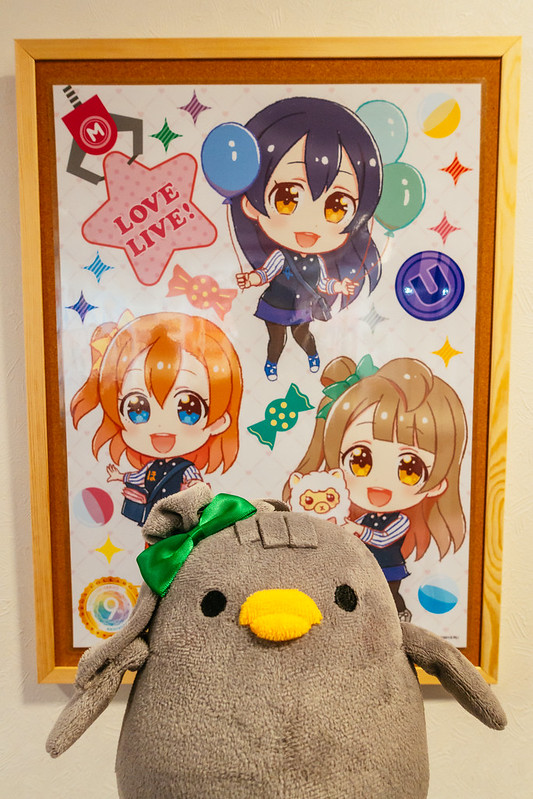 Cafe slots were roughly 1 hour each but since we were there for the first slot we got a few minutes of wiggle room to take a few more pictures which the rest you can view on my Flickr.

Afterwards brought some merch; mainly cases for our coasters and a few gatcha plates. Most of the standees and shikishi were all cleaned out so maybe it’s for the best…

Not sure when the next time I’ll be back… but would be down to try another collab cafe in the future!