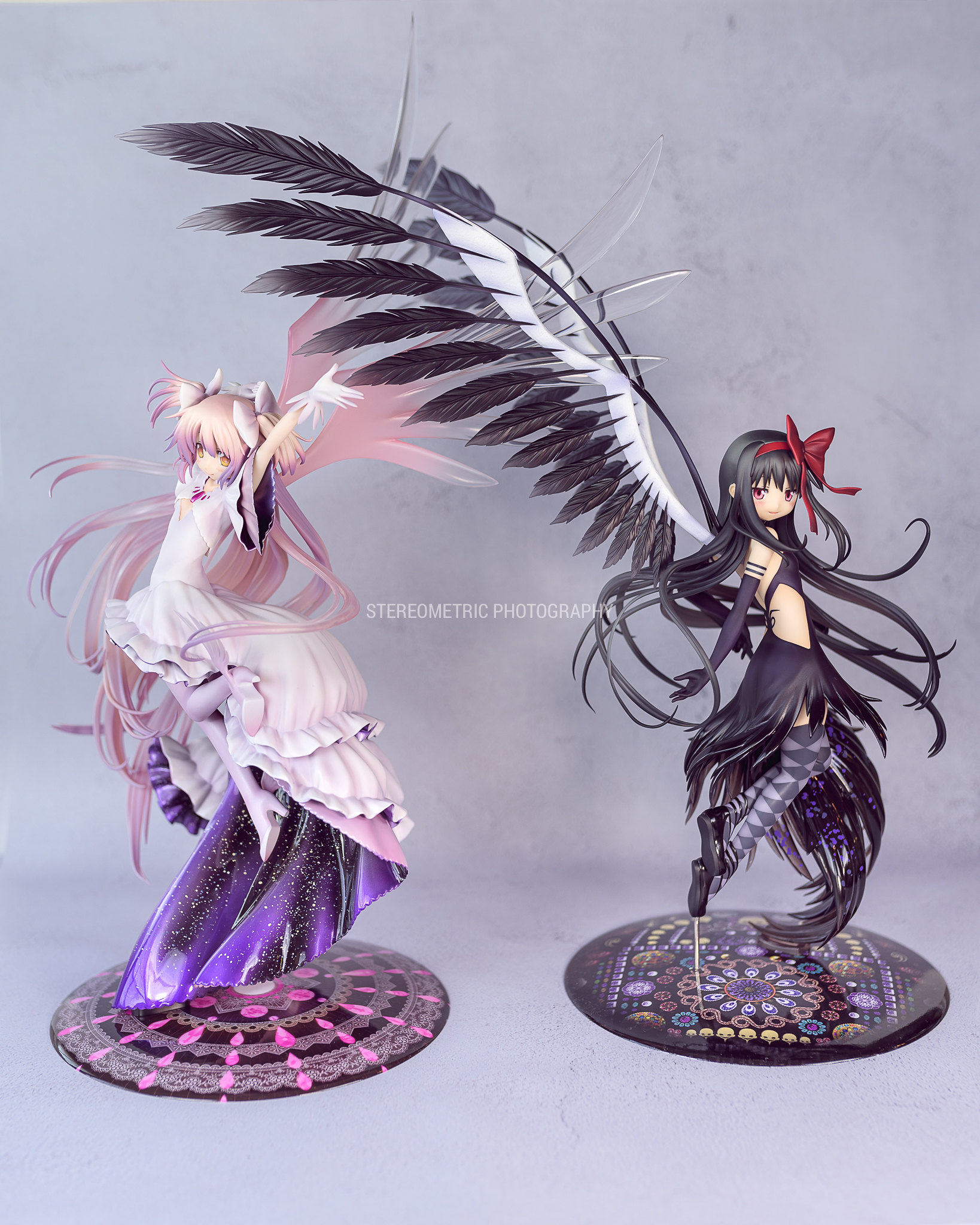 Hello everyone! It’s been awhile since I have posted a review. Had a few big life events happen such as moving and returning to in-person work. Now that I’ve settled into my new place wanted to share the first review in a few weeks:

Today we’ll be looking at Aniplex’s Madoka and Homura! 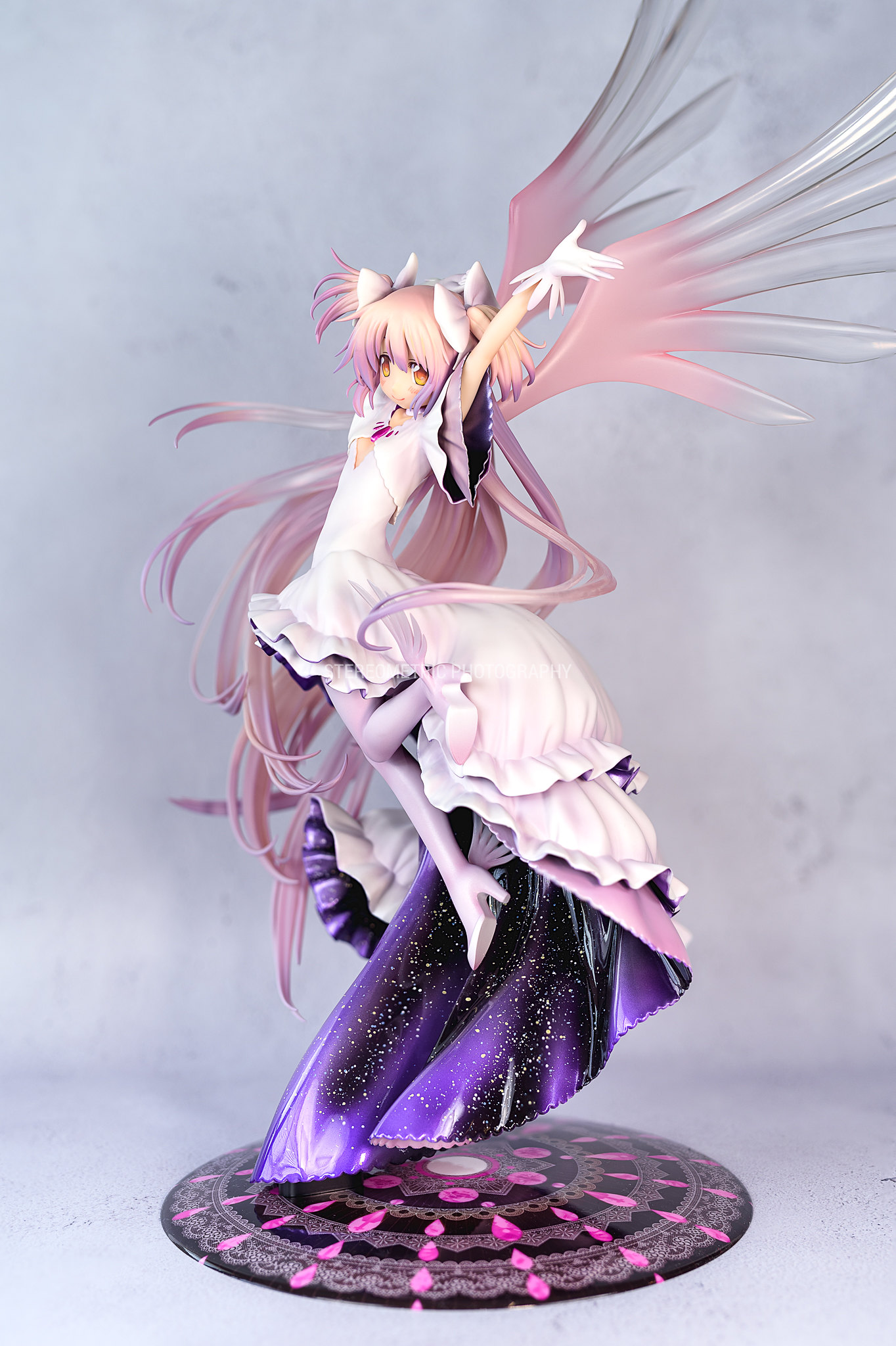 Madoka Magica is probably up there on my list of all-time favorite animes. I remember watching the show as it aired in my college dorm and being blown away by both the story and animation (although I was a biased SHAFT fan). It was even one of the few rare series I cosplayed from! Then, friends and I also drove out at least 45 minutes from campus just to watch the Rebellion movies (back when overseas anime screenings were extremely rare) 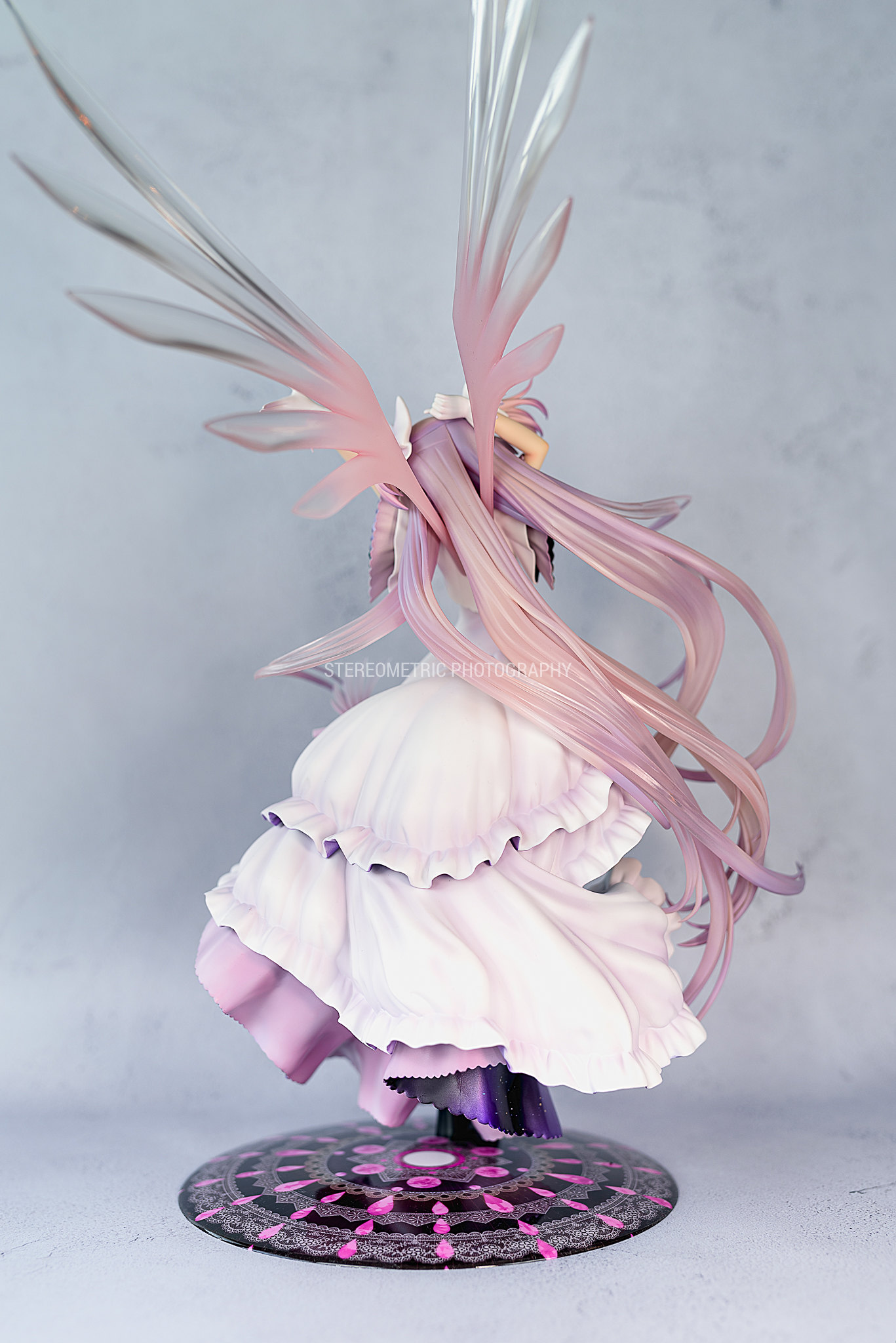 Very excited to finally showcase these 2 figures. I’ve had them in my collection for a few years now but didn’t really have the time and equipment to properly photograph them. 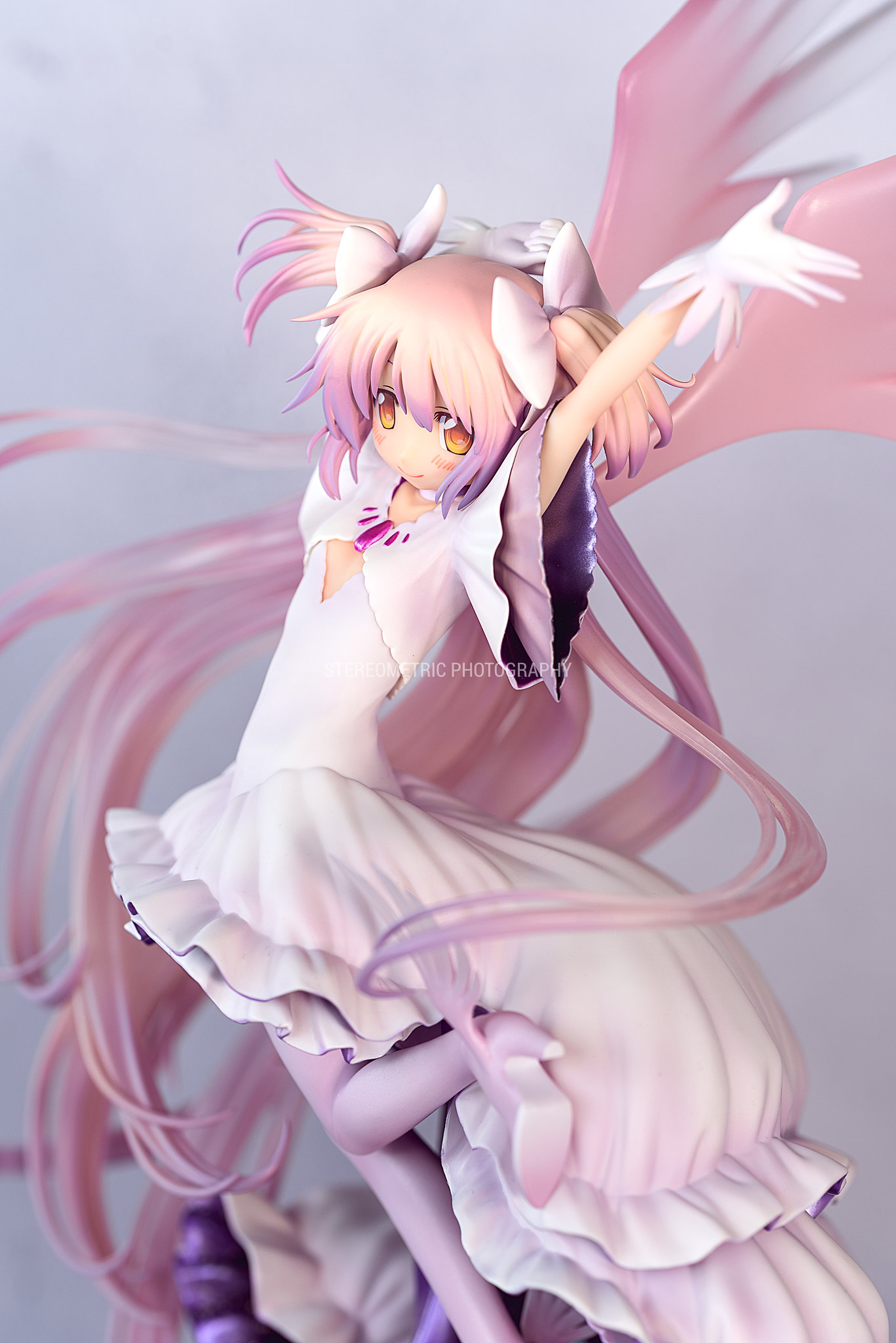 I actually own the famous GSC Ultimate Madoka figure as well as the Stronger Devil Homura that is paired with it (I’ll probably photograph them next). Those 2 figures were released a couple of years before the Aniplex ones. Back then I considered both to be the pinnacle of figure production, but after looking at these 2 Aniplex versions it’s amazing to see how far figure making has progressed. 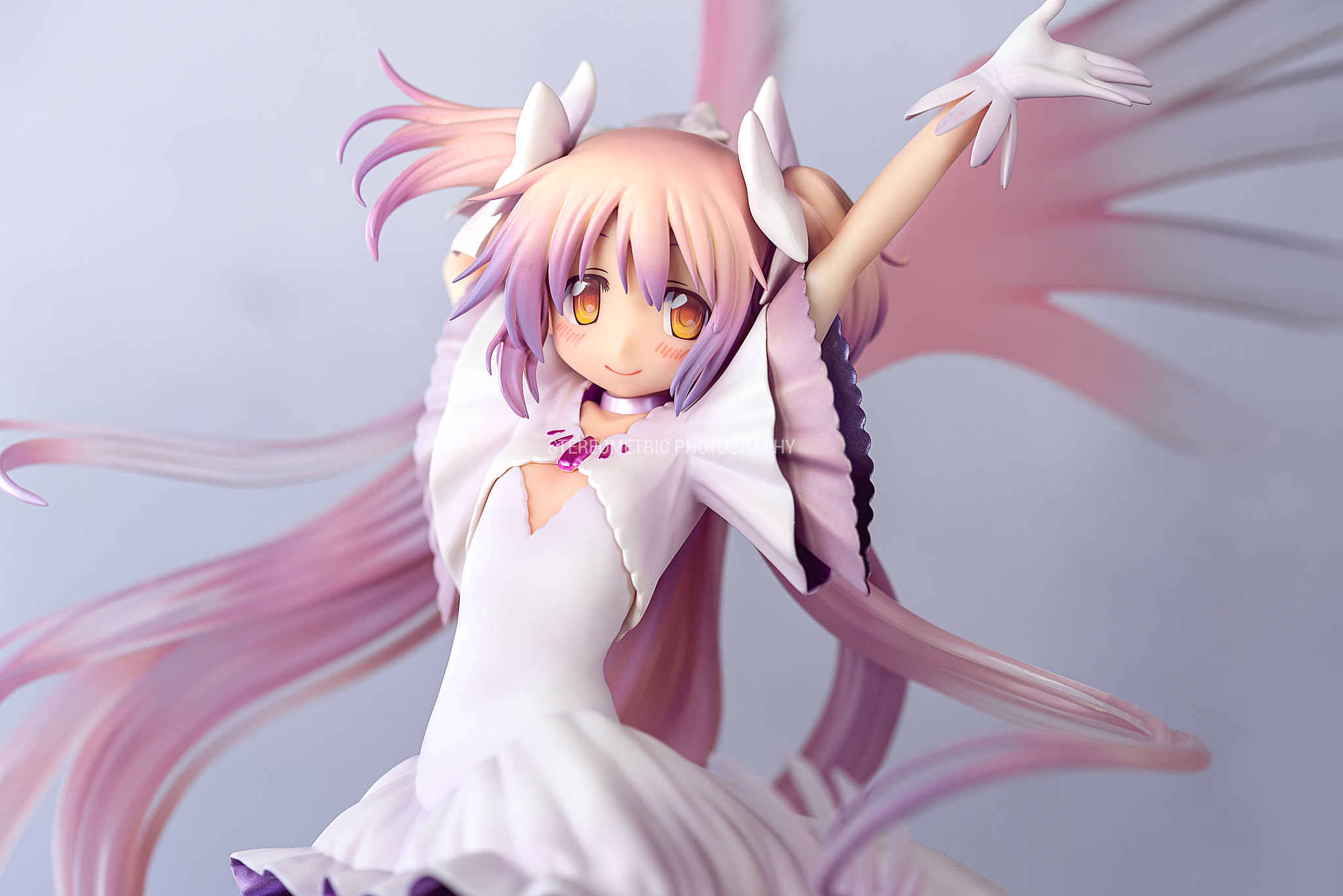 One of the things I love about these 2 figures is they are based off Ume Aoki’s art! (the original character designer, you probably recognize their art from Hidamari Sketch) While the anime character designs are beautiful, there is something special about Aoki’s art and I’m glad they were able to capture it in these figures. 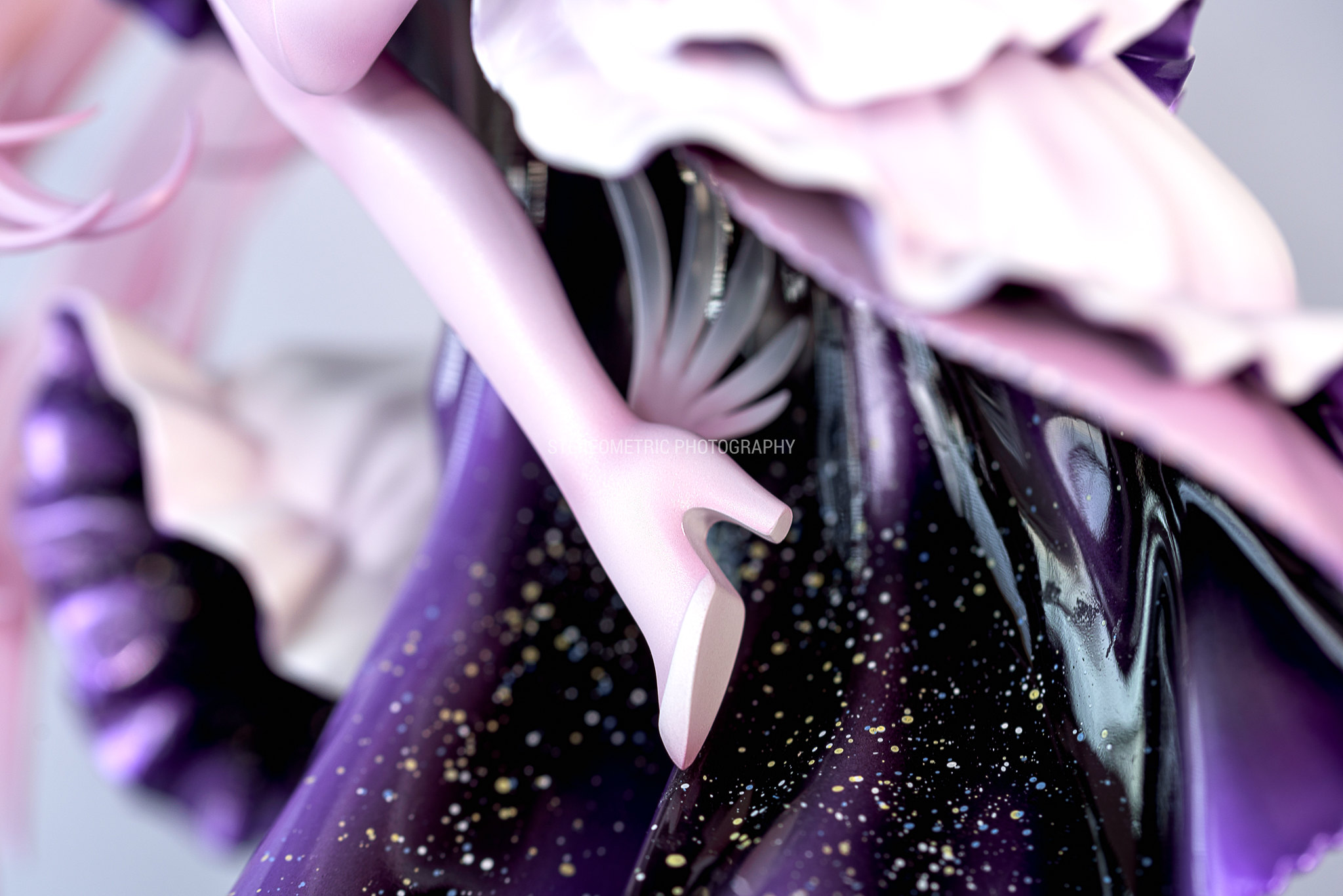 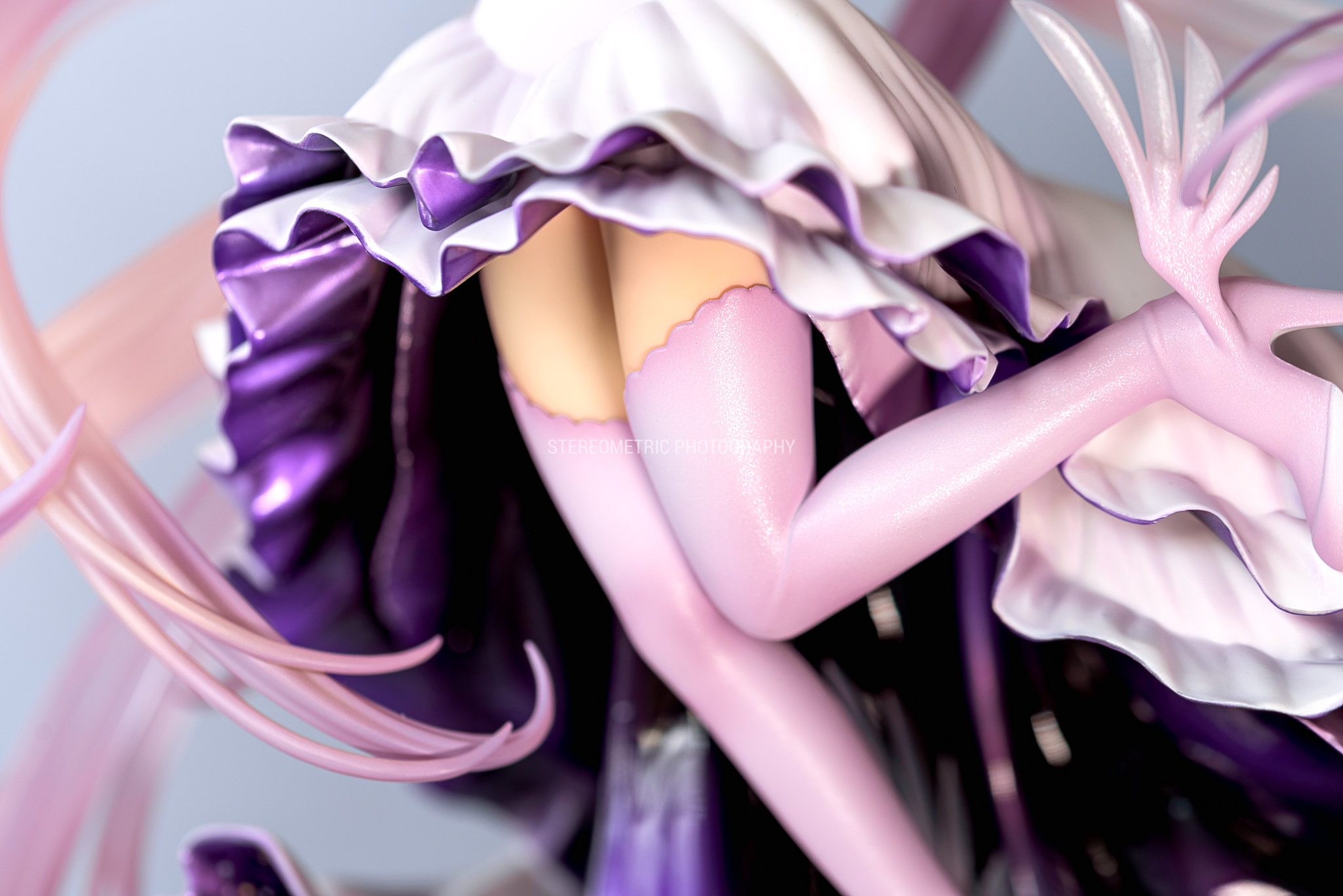 I think one of the scariest part with the GSC Madoka figure is that the base and stand are separate so I’ve always been fearful of displaying her in fears one day the stand will just…. fall off the base. Thankfully in the Aniplex version the dress is part of the base which makes the figure feel sturdier. 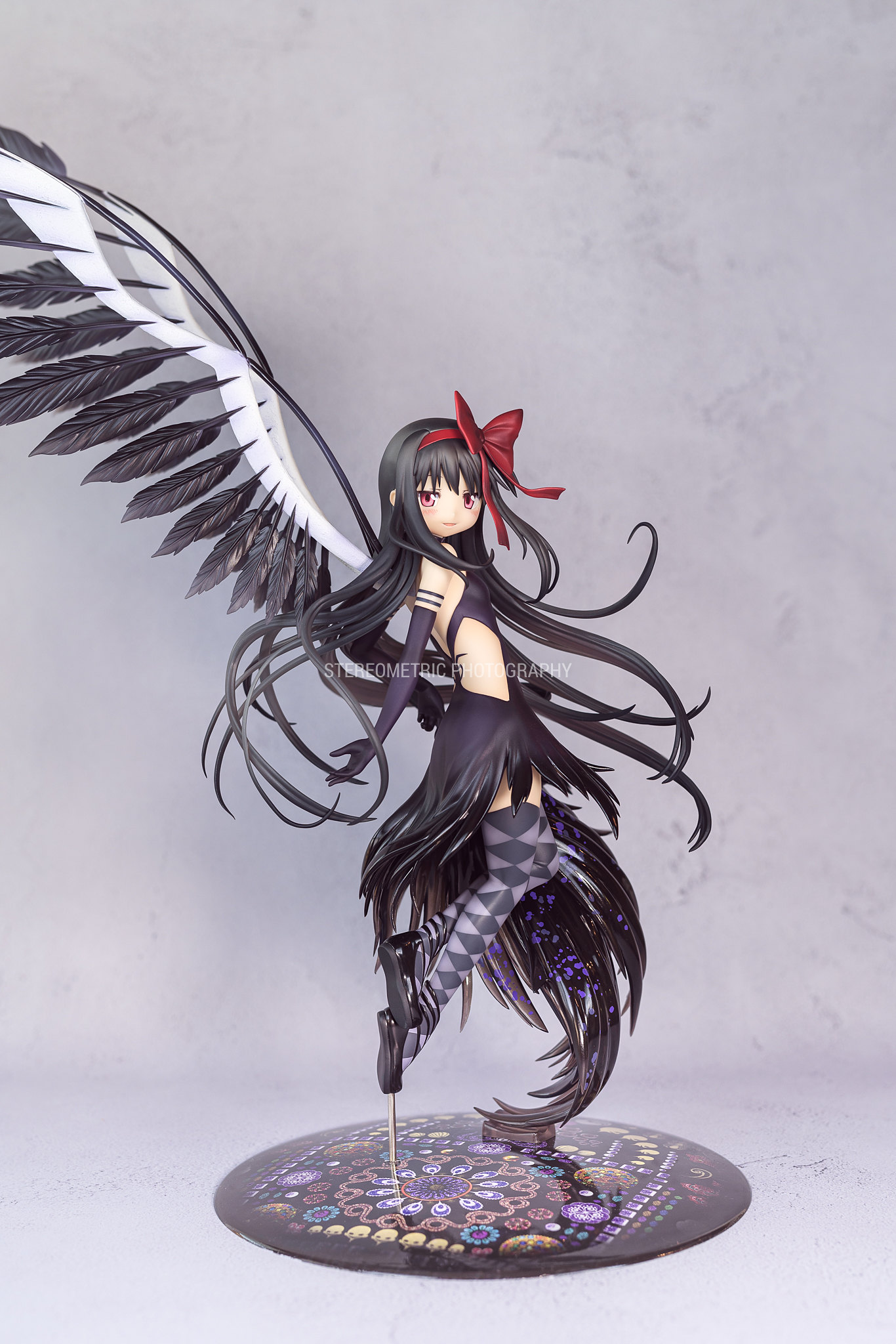 I could say the same thing about Aniplex’s Devil Homura that pairs with Ultimate Madoka! I think one of the appeals of this set were they were sculpted with the very purpose of being paired together! 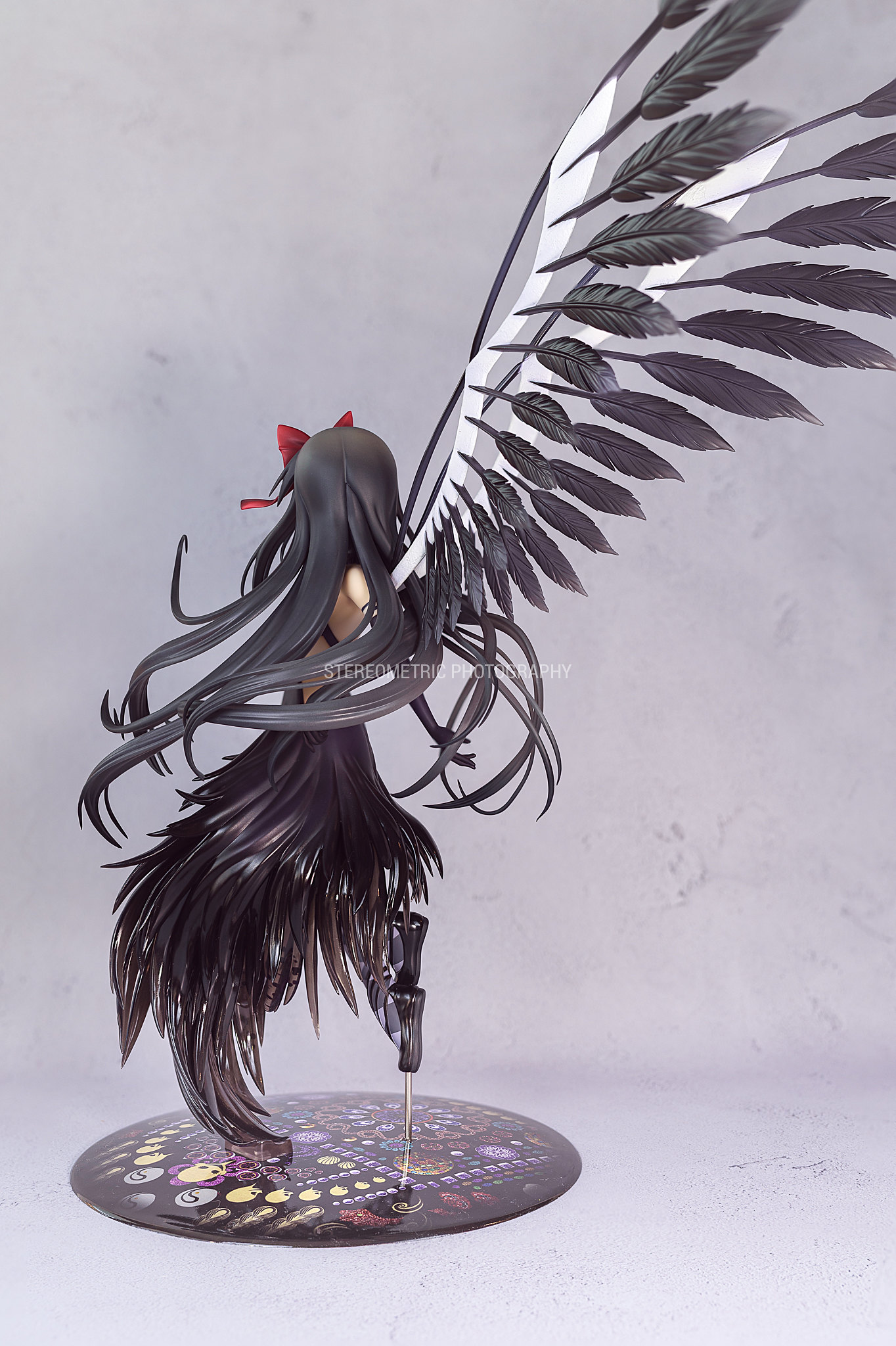 While the Stronger Devil Homura is a beautiful figure, I am a bit sad that it doesn’t necessarily pair well with the GSC Ultimate Madoka. 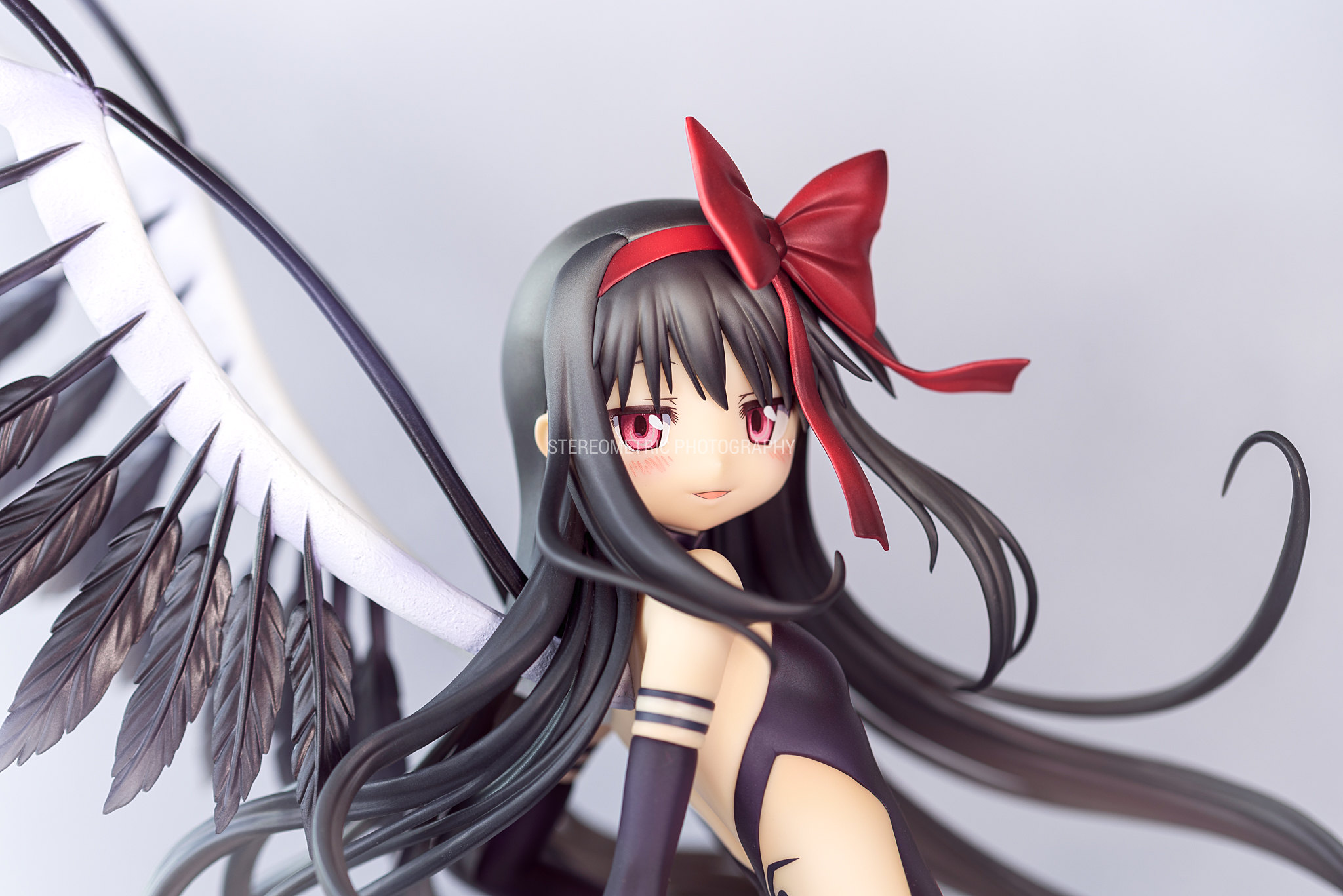 Again, Ume Aoki’s art really shines in these two figures. There’s a child-like innocence to it and softness in the eyes that I really love.

I am not sure why, but the sculpt of Stronger Homura’s face always seemed really awkward.  It seems a bit off in my opinion when compared to the original art and prototype. 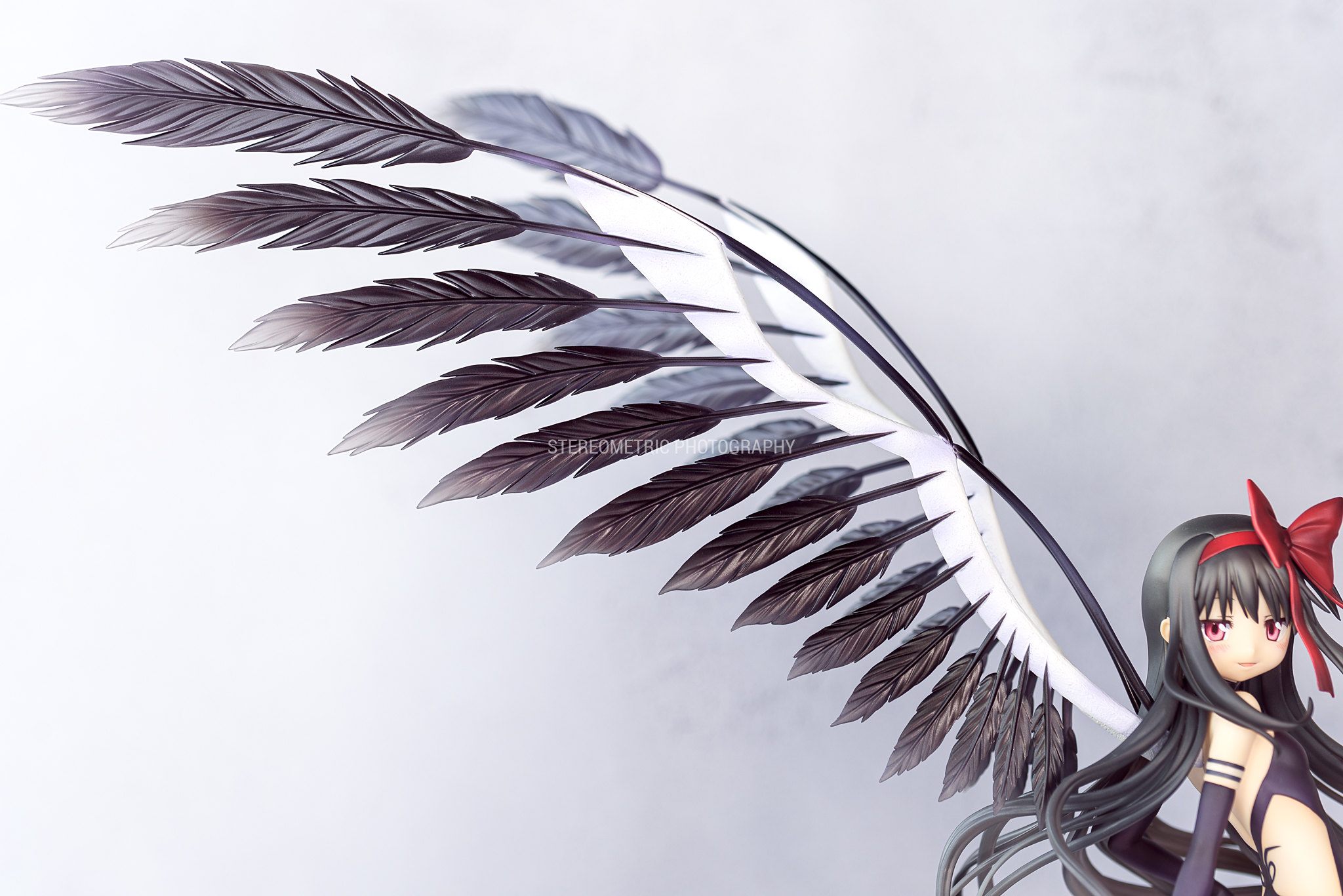 Finally I love how both wings seem both delicate yet powerful when placed next to each other! Seeing both side by side is very satisfying. Extremely happy that Aniplex’s production team really put a lot of thought into making sure both would pair well together.

These two figures came out a few years ago as exclusives so I am not sure if they are easy to track down nowadays. Most likely they will be sold secondhand for a pretty penny online if you must have them for your collection.

Anyways I hope you enjoyed this recent review! Since I recently returned to work I am not sure if I will be able to consistently keep up with the to bi-monthly but the goal is to at least try and do one review each month! Look forward to the next one!